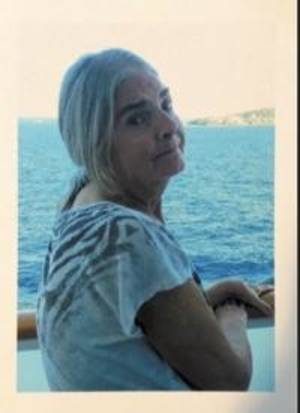 Pati was born in Poplar Bluff, MO, on Dec. 14, 1957, to Jess and Melba (Estes) Withrow. In 1967, the family moved to White Swan, WA, then to Union Gap in 1970, after purchasing the Shady Lane Motel. In July 1974, Pati gave birth to a daughter, Amber. In 1978, she fell in love with local guitarist Jack Garner, and the two welcomed son Jackson in April 1980. People still remember the huge party and jam session following Pati and Jack’s wedding on July 27, 1980. Pati enjoyed spending weekends watching Jack perform throughout Yakima Valley. She also enjoyed their deep sea fishing trips. Pati spent most of her life in Yakima, but in 1984, the family moved briefly to Lincoln City, OR, where they loved to explore the area and play on the beach. Over the years, Pati worked at Kershaw Fruit, Magic Kitchen, and Stop and Go. Her favorite job was cooking lunches at the VFW, where she took pride in providing hot meals and friendly conversation for all the veterans, but she had a soft spot in her heart for the newly-widowed veterans who didn’t know how to cook for themselves. Pati lost Jack in 2009 and Jackson in 2019 — and she spent the rest of her life waiting to be reunited with them. After becoming a widow, Pati moved in with her sister Becky, and the two enjoyed Hawaiian and Caribbean cruises, and trips to Boston, Florida, and Belize. Above all, Pati loved her grandchildren: from playing Supernana doing cannonballs into the pool to singing her signature birthday song, she gave her grandkids an abundance of favorite nana memories. Even when she was sick, she checked on each of them regularly. Pati had a kind heart and always worried about and regularly checked in on the people she loved.

Pati’s memorial service will be at 11 a.m. Saturday, January 29, at Christ Connection Church, 1118 McKinley Avenue. A reception will follow at the VFW, 118 S. 5th Ave.