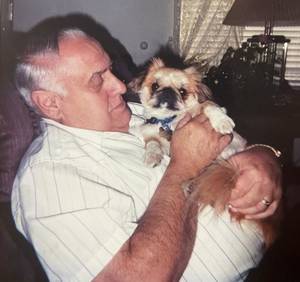 Leo Hogue left us on December 2nd, 2021 at YV Memorial Hospital after a hard fought battle with RSV/Pneumonia and complications from dementia. Leo was born on September 25th, 1943 in Bismarck, N. Dakota. At 16, Leo, his younger sister and parents moved to Seattle for a short time. They then moved to the Yakima area where they remained. Leo’s first job was at Terrace Heights Memorial Park for a couple of years. His next job was working in various warehouses as a forklift driver. This is where he met the love of his life, Gloria, and they were married in January 1970. The next place he worked was at Hop Extract for 5 years and then he moved on to Pepsi Cola Bottling Co. He remained there for the next 20 years. During his last several years at Pepsi Leo started remodeling homes as well as building a few houses. Finally it became too much to do both jobs, so Leo left Pepsi to start his own company, “Hogues Quality Construction,” which he operated for 20 additional years. He built many beautiful homes and duplexes all around the Yakima and Ellensburg area. He retired from his business in 2009. During all of these years Leo’s door was always open and he took in many family members, friends and even a few acquaintances who needed somewhere to stay. For the past 17 years Leo had a house full of grandchildren and even some great-grandchildren with him. He especially enjoyed taking many family members on vacation for an entire week at Seaside, Oregon, which created many wonderful memories for all of them. Leo loved to entertain and had some fabulous parties that many people got to attend. He was always ready to have dinners and feed everyone. He even participated in the cooking. His other great enjoyment was his monthly poker games with his friends and trips to various casinos. He and Gloria enjoyed several trips to Las Vegas with friends or family and went on several cruises to various locations. Leo loved his little dogs and often said he preferred them over a lot of people.

He had a good work ethic and little tolerance for those who did not. He was preceded in death by his dad and mom, Fred and Elsie Hogue, brother Louis Micheal, sisters Betty Bevers, Arlene Bunas and just recently his sister Geraldine Brown. He had lost one grandson, Justin Bena to cancer as well. Leo had also lost his beloved dogs Gizmo and Marylin who were waiting to greet him.

He is survived by his loving wife Gloria, his two daughters Lisa Bena and Tina Hogue; grandchildren Alicia, Miranda, Josh, Jayla, and Cody as well as seven great-grandchildren, cousins, nephews and nieces, and aunts and uncles.

At Leo’s request there will be no services, but you are encouraged to stop in and share a story and cup of coffee with Gloria and the grandchildren. In lieu of any flowers, a donation of clothing, food, or money to a homeless individual or family would be greatly appreciated at this giving time of year.