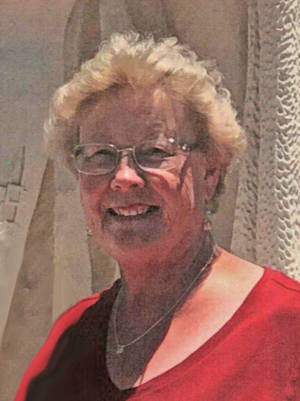 Elizabeth Sue “Liz” (Freeburg) Jones passed peacefully July 13, 2020. She was born August 19, 1952 to Lloyd and Esther in Sunnyside, WA, where she grew up with her siblings, David and Kathy. She earned a bachelor’s degree from Central Washington University and taught at Kinder Kampus until she met and fell in love with Darryl Jones in 1977. They married in 1979, and in doing so, gained four daughters whom she loved, as well as their husbands when they came along, and later her 11 grandchildren and 5 great-grandchildren.

She worked for 17 years at Talcott Music, and later ran her father’s soft water business in Sunnyside for many years before finally retiring.

Among her favorite activities were traveling frequently with Darryl, with Kathy, and with her girls’ families; researching genealogy, meeting previously unknown Minnesota, Swedish and German relatives; gardening; painting; drawing; and playing piano.

She is preceded in death by both parents, her brother, and survived by her large loving family including her husband, daughters, grandchildren, great-grandchildren, sister and numerous nieces and nephews.

Liz brought so much laughter and kindness to all our lives. She will be missed.

Memorial services will be held at a later date.