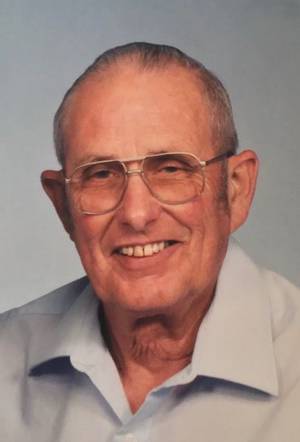 Paul David Guilland passed away peacefully on Monday, April 27, 2020 at the age of 92. He was born December 8, 1927 to Paul and Elva Guilland in Yakima, Washington. Paul spent his childhood in Ahtanum where it seemed every neighbor was related in some way. Many happy days were spent growing up on “the farm” and playing with close by cousins and childhood friends.

Paul attended Yakima High School, now known as Davis High School. He left school to join the Navy as soon as the law would allow, on November 8, 1945, one month to the day before his 18th birthday. During his time in the Navy he was stationed on the island of Guam and on the USS Turner (DDR834). Due to his service he was a lifelong member of the Veterans of Foreign Wars. In December 1948, his enlistment up, he return to Yakima and soon began working for what was then Eddy’s bakery. The bakery became Snyder’s Bakery and he continued to work there until his retirement. He married Marlene June Gohl on March 19, 1950 and welcomed the first of their four children, Deborah Ann, on March 28, 1951. Three more children soon followed, Julie, Stephen, and Mary.

Dad worked hard adding on to the family home, with the help of various family members, in order to meet the needs of his expanding family. There was always a project in the works or construction going on. Spare time was spent in his garden which he tended faithfully with many small “helpers” over the years. His greatest joy was loading up the camper, hitching on the boat, and heading out to the river or lake on a fishing expedition, often with grandkids along for the ride. Many great fishing stories were the result of these expeditions.

Dad was never happier than when he was spending time with friends and family whether at a backyard barbecue, fishing on the lake, or gathering at the family cabin. Over the years he has created countless cherished memories for his family and friends. We will miss his presence but his memory will glow in our hearts forever.

He is survived by his children, Julie (Nestor) Hernandez, Stephen Paul Guilland, and Mary (Mike) Clements, all of Yakima. Paul has nine grandchildren, 13 great-grandchildren, and two great-great- grandchildren, along with numerous nieces and nephews who he loved dearly.

The family would like to express their heart felt thanks to the caregivers at Good Samaritan Health care Center for their outstanding care and love given to Paul over the last several years.

In lieu of flowers, please consider donating to the Yakima Arboretum or to your charity of choice in Paul’s name.