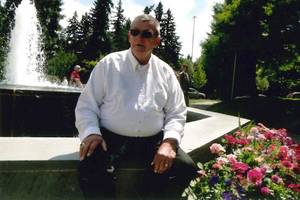 Beryle James “BJ” Hazelett passed away peacefully at home in Yakima on March 3, 2020 following several years of illness. He was 83.

BJ was born May 2, 1936, in Portage, Pennsylvania. He was the third of 11 children of Walter and Naomi Ruth Hazelett. Walter left the coal mines and moved the family west when BJ was 5 years old. They spent three days traveling by train to western Washington. The family eventually settled in the Portland area. BJ wasn’t much for school. When he was 17, BJ’s father signed a waiver so he could join the Army early. He served in Korea 1953-55.

BJ played rhythm guitar, and loved country and western music. In his 20s, he played with Bobby Bare. After about five years though, he wanted to try something else. BJ worked many jobs during his life. For nearly 34 years, he drove semi-trucks cross country. Later, he worked as a security guard. He retired at 62 due to health reasons.

BJ loved to work on cars. He was always ready to help family and friends. He enjoyed old western movies, and he was a huge Seahawks fan. He’d been a member of many CB clubs over the years. He was a member of the Church of Jesus Christ of Latter-day Saints, where he held several positions for over 20 years.

The family would like to thank the visiting hospice personnel who so greatly helped BJ in his final weeks. A memorial service will be held Saturday, April 11 at 11:00 AM at the LDS Chapel, 4307 Englewood Avenue, Yakima. Interment will be at Taylor Cemetery, Idaho Falls, Idaho. Arrangements are by Rainier Memorial Center, Yakima