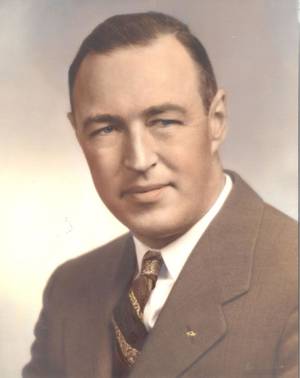 Joseph Alexander Park passed away on Dec. 24, 2019 at Living Care Health Center at the amazing age of 108 years. He was born to William John Park and Mary Greg Starrett on Dec. 11, 1911 in Grandview, Washington. Both of his parents were immigrants from Northern Ireland. Joe was one of four children. He had two sisters, Frances and Martha, and a brother, Dave. Joe’s father was a contractor and a stone mason and his mother a housewife. The family lived in Grandview for many years until Joe’s farther decided to move to Tacoma in order to pursue better work opportunities.

After Joe graduated from high school in 1929, he went to work for his father. They worked together for many years and eventually formed a construction company along with Joe’s younger brother, Dave. It was named W.J. Park and Sons. In 1955 Joe decided to move to the Seattle area and formed his own company, J.A. Park Construction. During his career as a general contractor, Joe was involved in commercial, residential, industrial, and marine construction. Joe was also a developer and at various times in his career he owned a ready mix plant, a dredging company and he built four pulp mills for the Weyerhauser Company.

Besides Joe’s work and recreational activities he was a 32nd degree Mason and Shriner, a Rotary member, a past Commodore of Meydenbauer Yacht Club in Bellevue and President of International Power Boat Association (IPBA). He was also active in the Presbyterian Church while he and the family lived in Yakima.

Joe had a passion for power boating. He and Fran bought their first boat, a 31 foot CrissCraft in 1951. That was the beginning of Joe’s love affair with boating. Over the span of some 25 years Joe owned four power boats, three that he built himself. He was very involved in the Meydenbauer Yacht Club in Bellevue and participated in many predicted log races. The whole family enjoyed cruising the Puget Sound area, the San Juan Islands and even up to Alaska.

Joe also owned an airplane and used it to fly between jobs and his home. He loved flying and participated in the creation of the Yakima Airport, now called Mcallister Field. In 1932 Joe got his flying license which was signed by Orville Wright. He owned a number of different planes and enjoyed flying for many years.

Joe met his wife, Frances, in a Sunday school class when they were just 14. They became friends but did not date until they were in high school. They dated for a few years and were married in July 1935. Joe and Fran moved to Yakima where they raised their four children, Kathryn, Joe, Mike and Will. Their marriage was a true partnership characterized by love and respect and a total commitment to each other and their family. Their love story lasted for 76 years until Fran passed away on Dec. 9, 2010.

Joe and Fran retired in 1972. They moved from Bainbridge Island to Seattle and then to Anacortes, Washington. Joe wanted to be close to a body of water because he wanted to build another boat. They lived in Anacortes for almost 30 years and while there Joe built a 45 ft. boat he named the Firkin, meaning “little bucket.” That was the third boat Joe had built. He was an amazing and skilled wood worker.

Joe and Fran enjoyed many years of boating in Puget Sound and the San Juan Islands with friends in the boating community. After Joe sold their boat, he bought a motor home so they could tour the United States. Joe and Fran spent many winters in California, Arizona and even one in Florida.

In October of 2010 Joe and Fran felt they needed to move closer to family because of their deteriorating health. Their son, Joe, arranged for them to enter Living Care, a three level health facility, located in Yakima.

Unfortunately Fran suffered a stroke on Dec. 9th and passed away just 3 months short of her 100th birthday. Joe continued to live his last few years at Living Care in skilled nursing. He passed away on Dec. 24, 2019, his 108th birthday, and joined his beloved Fran in heaven

Joe made many friends in the nine years he lived at Living Care. He was very fond of his care givers as they were of him. He loved the food and was the first in line at meal time! Joe’s family is very appreciative of the wonderful care Joe received at Living Care by the staff and care givers. They were kind and loving and really concerned about his well being.

Joe was a man with an adventuresome spirit and a “can do attitude.” He worked in an era where your word was your bond and a handshake as good as a contract. Joe was known for his integrity, honesty, and sense of fairness.

Joe’s first love was his family. He was very proud of his children and when asked how he wanted to be remembered he replied, “as a good father.” Joe was the first to tell anyone that he was blessed with a wonderful family and a good life.

Joe loved and was loved. He will be deeply missed by his family and friends but comforted by the wonderful memories they have of his well lived life.

Celebration of Life will be held at Living Care Retirement Center in the Meyer Auditorium (3801 Summitview Ave.) on Saturday, Jan. 25th at 11:00 AM. To leave a note for the family please visit www.keithandkeith.com