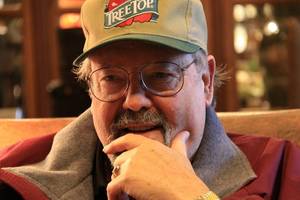 In Loving Remembrance of

Richard was born in Pasadena, Texas to a mother from a hard-scrapping Texas family and a father likely labeled in Tennessee during the Dust Bowl as “GTT” (Gone To Texas). The strength of his family and the spirit born in him gave him the drive to accomplish many dreams in his lifetime – dreams that did not come easily nor were they put in reach for him by others. Throughout the many phases of his life, God was with him and – whether Richard was sure of it or not – he was with God.

When Richard graduated from Pasadena High School, his goal was to “get killed and eat snakes” as he put it . . . to join the military. So, he lied about his age and signed up for the Marines, but they called his mother. Mother sent him off to Abilene Christian College and from there, when of age, he promptly joined the Army as a PFC. They asked him what branch he wanted to serve in and he thought camping out and marching sounded like fun, so asked for the infantry. He was in the army during the Vietnam War for “5 years, 9 months, and 27 days,” leaving the service as a Lieutenant in the 101stAirborne Rangers (the Special Forces, known at that time as the Green Berets). He had the one-and-only bumper sticker he ever used on his car at that time: “God Bless John Wayne.”

Out of the Army and with three young children, Carole, Rob, and Brad, he put himself through Texas A&M. While he had some support from the military it was not like today’s, so he worked two jobs while going full time to school, graduating in 4 years with a bachelor’s degree in business administration in 1969.  His mathematics professor, who was his mentor and admired him greatly, had lined up a job for him at General Electric. Unfortunately, the professor died just before Richard graduated, but Richard was able to find an entry-level job at Shell Oil Company in Houston, TX. After being promoted to a supervisory position in accounting, Richard took up the opportunity to transfer to the Agricultural Division of Shell Chemical Company and relocated from Texas to the Midwest. He joined at the time that modern chemistries were just being introduced to farmers – with mixed results as they learned how to use them. The company exchanges with farmers at that time were called “Pork Chop Hill,” after a Korean battle fought to demonstrate that agreement in contentious negotiations did not equal unwillingness to continue fighting, if necessary. Another part of that fighting spirit that was instilled in him . . .

Richard and Bernalyn met in the Midwest while both working for Shell Chemical Company. Since Shell had an anti-nepotism policy, when their friendship became more serious, they both quit. Bernalyn relocated to Washington state, and shortly thereafter (when Bernalyn sent him a marriage license in the mail), Richard followed and they were married in Puyallup in 1978. Rob and Brad joined them in 1979; Carole stayed in Texas and followed the legacy of becoming an Aggie. Richard was tremendously proud of his children, their accomplishments and their continued faith expressed by how they lived and raised their own families. During this time Richard served as a voluntary and paid sheriff, worked in sales, and served his family and church with love.

When local jobs changed with industry consolidations, in 1988 Richard and Bernalyn started a consulting business related to the agricultural chemical field and regulatory work they had been involved in over the years. Richard, with his ever-fertile imagination, was one of the first to see how spatial technologies and geographic information systems could be applied to agricultural field solutions and chemical risk assessment. He also obtained his pilot’s license and flew many cross-country trips to inspect field sites or transport staff, and was able to complete a circumnavigation of the United States lower 48. He was active in the company until the present, although in about 1985 he began doing pastoral work on off-hours. In the 1990’s, he started seminary at Northwest Baptist Seminary (now a branch of Corbin University), where he obtained a Masters of Divinity in the mid-1990’s.

Oh, and let’s not leave out one of his first loves, the ocean. His first boat in Washington was a falling-apart 26-foot trawler, but he worked his way up to a 50-foot Grand Banks motor yacht on which Richard and Bernalyn not only lived but also founded Compliance Services. After those boats he returned to sailing vessels, and finally purchased his dream vessel, a 1933  two-masted sailing schooner, 58 feet long, which he sailed in the 2002  American Sail Training Association Pacific Coast Tall Ships race from Seattle to Los Angeles.

Perhaps it was the spirit of his mother and father, the experiences in the Army, his applied determination to become an Aggie or the willingness to continue fighting for a good cause when necessary that  shaped him ultimately for being a “Pastor to Pastors.” He willingly listened, counseled, and took the blows for church staff and pastoral teams when things got oppressive or overwhelming. What may have appeared as rough edges to some was his way of protecting a very tender, giving heart. He touched us all, in one way or another, with these gifts of his. He is loved, cherished and remembered by many and now safe in the arms of Jesus asking all of those questions he had wanted to ask about the deeper meaning of God’s word that we too will only be able to see when we too meet our loved ones and join with them in Our Savior’s eternity.  Complications from pneumonia took Richard away from us suddenly and unexpectedly but he will forever be a shepherd to those who loved him.

For those wishing to honor Richard’s memory, please consider a contribution in his name to Life Choices of Yakima or the Union Gospel Mission of Yakima

From a note tucked in Richard’s Bible: Trust in the Lord with all your heart; do not depend on your own understanding. Seek his will in all you do and he will show you which path to take (Proverbs 3: 5,6). Always be full of joy in the Lord. I say it again – rejoice. Let everyone see that you are considerate in all you do. Remember, the Lord is coming soon. Don’t worry about anything. Instead pray about everything. Tell God what you need and thank him for all he has done. Then you will experience God’s peace which exceeds anything we can understand. His peace will guide your hearts and minds as you live in Christ Jesus (Philippians 4: 4-7). Then Jesus said, “Come to me, all of you who are weary and carry heavy burdens, and I will give you rest. Take my yoke upon you. Let me teach you, because I am humble and gentle in heart, and you will find rest for your souls. For my yoke is easy to bear, and the burden I give you is light.”  (Matthew 11: 28-30)

A memorial service will be held on Saturday, January 11, 2020 at the Nile Community Church at 2:00pm