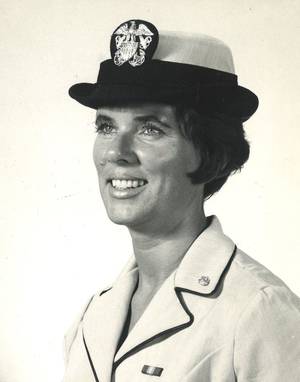 Affectionately known as ‘Bernie’ to her family, she was born in Wenatchee, WA on November 11, 1932 to Alden Wesley and Hortense Josephine Ayling, the second of eight children. The family moved to Osborne and then Setons Grove where her dad worked on Grand Coulee Dam.

Bernie graduated from Coulee Dam High School in 1951 where she actively participated in cheerleading, tennis and majorette (she could twirl two batons!).

Bernie attended St. Luke’s School of Nursing in Spokane, WA. Afterwards, she attended Washington State College, receiving her bachelor’s degree. She then moved to Seattle working as a nurse at Doctors Hospital.

After traveling around the states with her sister Linda, she joined the U.S. Navy in 1961 and was stationed in Camp Lejeune, Philadelphia, Rota Spain, Newport News, Great Lakes, Long Beach, San Diego and finally Oakland, CA where she was “piped aboard” as Lieutenant Commander.

Bernie retired after 20 years of service, took some creative writing classes, becoming adept at poetry writing, worked in a bank and finally moved to Yakima, WA where she spent the rest of her life.

She was preceded in death by her parents, two nephews, and sisters Trina and Billie Jo Walker. She is survived by one of the remaining “Triple B” sisters, Beverly Zimmerling, the “JKLM” siblings, Jim Ayling, Karen Turner, Linda Wood, Michael Ayling and 26 nieces and nephews.