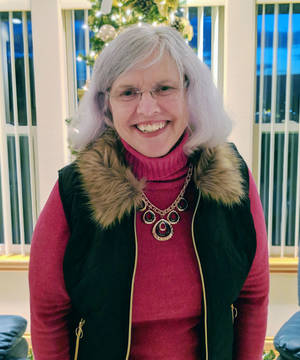 Diane Marie (Sullivan) Fossum was born in Washington, D.C. on Nov 24th, 1951.  and died on June 27th, 2019 (67) of Alzheimer’s.  She will be remembered by her friends and family for her beautiful smile and slightly purple tinted beautiful silver hair.  Diane grew up in Alexandria VA and participated in a special vocational secretary program in high school where she worked half a day her senior year at the Pentagon.  In her case she had the privilege of working for Vice Admiral Baldwin who was the Admiral in charge of all aspects of Naval Aviation.  When she graduated, she received an award as the best Secretary in Virginia and could take shorthand accurately at 150 wpm.  She also won a State Award as the Best Driver in Virginia, having won her High School, then District, then Regional, then State Driving Skills Competitions.  She went on to work for several corporate attorneys specializing in large land & apartment managing companies, got married, had two kids, Megan and Justin, and then got divorced.  In August of 1980, the first day on a new job as the Office Manager and personal secretary for the head of a large DC Law Firm, she met her future husband, Phill Fossum, on the subway on her way home from work.  They were very happily married for 38 years.  Phill’s political job ended with the Reagan Inauguration and he spirited Diane and her two kids off to Yakima, WA to join the family (Fossum Orchards) fruit business.  Diane worked as a “stay at home” Mom but also found time to ski in the winter and play tennis in the summer.  She joined Women’s Century Juniors and was the Chairman of the Club’s highly successful Home Tour during the Yakima Centennial.  She was also a Back Stage Docent for the Capital Theatre and program chairman for Yakima Town Hall for 3 years.  During that time she was personally responsible for bringing to Yakima such famous speakers as Jacques Cousteau, Ollie North,  and most notable, Steve Forbes just before he ran for President.  In 2002, the Fossum family moved to the Tri-Cities where both Phill and Diane were heavily involved with Rotary.  As a member or the Richland Rotary Club, Diane had 4 straight years of perfect attendance, was a Board Member, a Club Treasurer and a Club Secretary.  Diane and Phill were able to visit many places in their time together.  Major trips included a one month Rotary Friendship Exchange trip to Australia, a two week  alaska Cruise, multiple trips to Disneyland, Disney World, Hawaii, a Viking River Cruise (Budapest to Amsterdam), a 2 week Viking Mediterranean Cruise, and in 2018, a 4 1/2 month Viking World Cruise from Miami to London.  Diane’s Alzheimer’s prevented retention of memories on this last cruise but she enjoyed every day in the moment.  Diane was a very special lady.  Loved and appreciated by those who knew her and much too young to be taken by this debilitating disease.  She is survived by her husband Captain Phill Fossum, USNR (ret), two children, Megan Wallace (Rick) of Yakima and Justin Fossum (Jessica) of Tacoma, one brother, Craig Sullivan (Carol) of Cleveland, TN and 4 grandchildren Katelyn, Helen and Devin Niebuhr of Yakima and Dax Fossum of Tacoma.

A Celebration of Life Memorial Service will be held at 11:30 am at  Rainier Memorial Center 2807 Terrace Heights Dr.  Yakima on July 10, 2019.  Donations in lieu of flowers may be made to the University of Washington Alzheimer’s Disease Research Center.