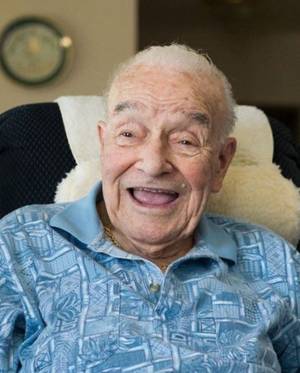 Rollo graduated from Yakima High School in the class of 1942 1/2 and shortly after enlisted in the U.S. Army where Rollo was promoted to Sergeant and assigned as a sqaud leader.  On D-Day, June 6, 1944 he landed on Utah Beach with the 4th Division.  From there he survived the Normandy Hedgerows, took Paris, broke though the Siegfried Line, cleared the Hurtgen Forest and was on the front line when the Battle of the Bulge began.  Rollo's unit continued on into Germany and remained on the front lines until the end of the war.  When the fighting was over, Rollo spent the next 4 months recovering in an Army Hospital.  For his military service, Rollo was awarded five Bronze Stars.  Years later, France awarded him a Medal Of Honor for his actions on D-Day.

Back at home, Rollo graduated from Yakima Business College and worked for Yakima Hardware and then Rankin Equipment.  It was at this time that Rollo met the love of his life, Ann McCafferty.  On June 13, 1948 they entered into a marriage that would last over 70 years and produce two children, two grandchildren and five great-grandchildren.

Rollo's experience in auto parts and farm equipment led him to work at Moxee City Warehouse, Jim's Garage in Tieton, Turner Implement and to eventually open his own business, Selzer-Worden in Union Gap.  Ann eventually convinced Rollo to help run her business, The Mushroom Craft Center in downtown Yakima.  The business was a success, but in 1996 they closed the store so they could retire and travel.  Rollo and Ann traveled the United States and Europe extensively, but Rollo's favorite destination was always Hawaii.

A memorial service & reception will be held at Rainier Memorial Center on Saturday, December 1, 2018 at 2 pm.