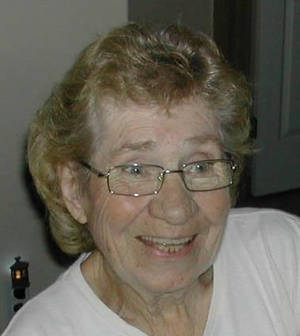 On Sunday, November 18, 2018, Betty James received her call from the Lord. She passed away peacefully at Yakima Regional Hospital.

Betty was born on April 7, 1934 in Yakima, Washington to Lyle & Marie Dexter. She grew up in Yakima and attended St. Paul’s Grade School and St. Joseph Academy High School. In 1954 Betty married Leo Berman, also of Yakima, and the couple moved to the Seattle area. After Leo’s untimely death in 1971, Betty found herself a single mom to seven young children. She had never worked to support a family on her own, but she was determined to make ends meet. She held multiple jobs during those days, often working in excess of 80 hours per week. In 1973 Betty and the kids moved to Yakima, where she could be closer to her family. It was there that Betty started a career in law enforcement. She was hired as a dispatcher for the Yakima County Sheriff’s Department. As time progressed, Betty was promoted to Deputy, and then into the County Jail as a Matron. Betty worked her way through the ranks and was promoted to Sergeant, and ultimately to her final position, Lieutenant and Chief Jail Administrator. Upon her retirement in the early 1990’s, there was no female with a higher law enforcement rank in all of Washington State.

In 1986 Betty reunited with the love of her life, and married John (Jack) James. Jack and Betty had gone to school together at St. Paul’s and knew each other as far back as the first grade. The two had many things in common, including both losing previous spouses, careers in law enforcement, and much more. In their retirement years the couple enjoyed being actively involved in the VFW, Yakima Eagles, camping and fishing at Rimrock Lake, bowling, and family activities. They remained happily married to this day.

Betty was preceded in death by two daughters, Katherine (Berman) Lawson, and Susan (Berman) Barger, and by one granddaughter, Amanda Berman. She is survived by her loving husband, Jack James of Yakima, by three daughters (Pattie Gipson of Selah, Christine Greenough of Tampa, FL, and Janet Whitaker of North Bend, WA), by two sons (Bill Berman of Wenatchee, and David Berman of Yakima), by one brother (Dave Dexter of Selah) and by one sister (Margie Ryerson of Langley, WA). In addition, Betty had 13 grandchildren, 10 great-grandchildren, and numerous nieces & nephews. There was nothing Betty loved more than her grandchildren or great-grandchildren coming to visit her and Grampa.

No formal funeral is planned. The family will conduct a private remembrance gathering and celebration for immediate family members. Those wishing to honor Betty’s life are encouraged to donate in her name to The American Heart Association.