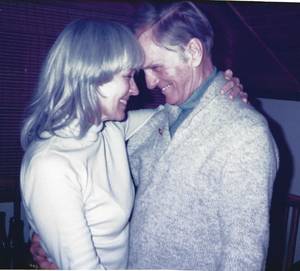 Erline Anderson was born on January 3rd, 1928 in Ellensburg, Washington. Her parents were Juanita and Earl Anderson; they were in the dairy business; owned the Enfield Dairy. Erline was the oldest of three children: Paul Trogan Anderson and Sara Lee Anderson O’Connor. She is survived by her sister Sara Lee.

Erline had an idyllic life in Ellensburg. She grew up in a loving household where her parents uniquely prepared her for life’s challenges. She grew up riding horses; was the Princess of the Ellensburg Rodeo in 1945. Her sister Sara Lee was the Queen of the Rodeo in 1949.

Erline was an accomplished musician; she played the piano and the French Horn. She and her sister and father sang in the Triple Trio that travelled promoting the Rodeo. Earl was well known for his beautiful bass voice and sang in the Presbyterian Church choir most of his life.

Erline really thrived on opportunity and challenge. She attended Stanford University where she received her degree in History and Spanish. She was the Vice President of the Stanford Student Body her senior year.

She married, moved to El Paso, Texas and had two children who survive her: her daughter Christine Schuster Khemis of Snohomish, WA and her son, Andrew Schuster of Yakima.

Erline and her two children moved back to the Northwest to Yakima in 1960 where she was a school teacher. She taught grade school at Robertson Elementary School and secondary school at A.C. Davis High School where she taught English and Spanish.

She moved to Bellevue and taught at Bellevue High School until 1969 when she returned to Yakima upon marrying John Hutchins Reber. “Jack”, as he was known, was the General Manager of Cascade Broadcasting Co. (KIMA), and later in his life was an aide to Congressman Mike McCormick.

Later he became a consultant to the Yakama Indian Nation Tribal Council where he was instrumental in accomplishing the development of the Cultural Center in Toppenish, WA and completed his multifaceted career teaching Logic and Critical Thinking at Heritage College in Toppenish. Jack died Nov 9, 2017 and is buried at Arlington National Cemetery in Washington D.C.

Erline also became a consultant to the Tribal Council and was instrumental in environmental issues relating to hydrology and the hazards of the nuclear industry’s actions at Hanford.

As a young single parent in Yakima in 1960, she sought out an activity that she and her two kids could enjoy together… skiing was the answer, and it became a life long delight that she enjoyed until her 85th birthday!

But on the way to becoming a skier, she became a mountaineer. White Pass was not only a great family ski area, but it was also a “who’s who” of Northwest climbers, and through the Cascadians, she also became a climber. Trained at Painted Rocks at the mouth of Cowiche Canyon among many other places, and in 1962, she climbed Mt. Olympus and Mt. Stewart, climbed and skied from the summit of Mt. Adams, and was the first woman to ski from the summit of Mt. St. Helens (the old one!) and the summit of Mt. Rainier; even climbed Rainier twice in two weeks! Her climbing mentor and partner was Robert “Bob” McCall; a true mountain man.

Erline had so many interests and causes she supported. As a believer in Jesus Christ, she recognized the wisdom and inspiration of Martin Luther King with his Biblical message to “judge people by the content of their character”; the Civil Rights Movement was a central element in her role as a Christian, an educator, as a parent, as an American. We often laughed how the very values that labelled her, often with consequences as a “crazy liberal” in the ’60’s were still the very same values that now often labelled her as a “crazy conservative” today. So much for labels. MLK’s message still needs to be heard.

Erline was a person of great character.

She suffered a stroke in November of 2014, bravely fought to regain some of her strength, struggled cheerfully, and succumbed to her frailty on November 11, 2018. She was two months from her 91st birthday.

Erline was my Mother, my greatest advocate, wise councilor and best friend.

She will be missed terribly, but I am so thankful for her and that she has finished the race she was given to run… and she has won! She is home safe and sound with her risen Lord and Savior Jesus Christ!

We Praise God for her, and if you knew her, we hope you will join us in that.